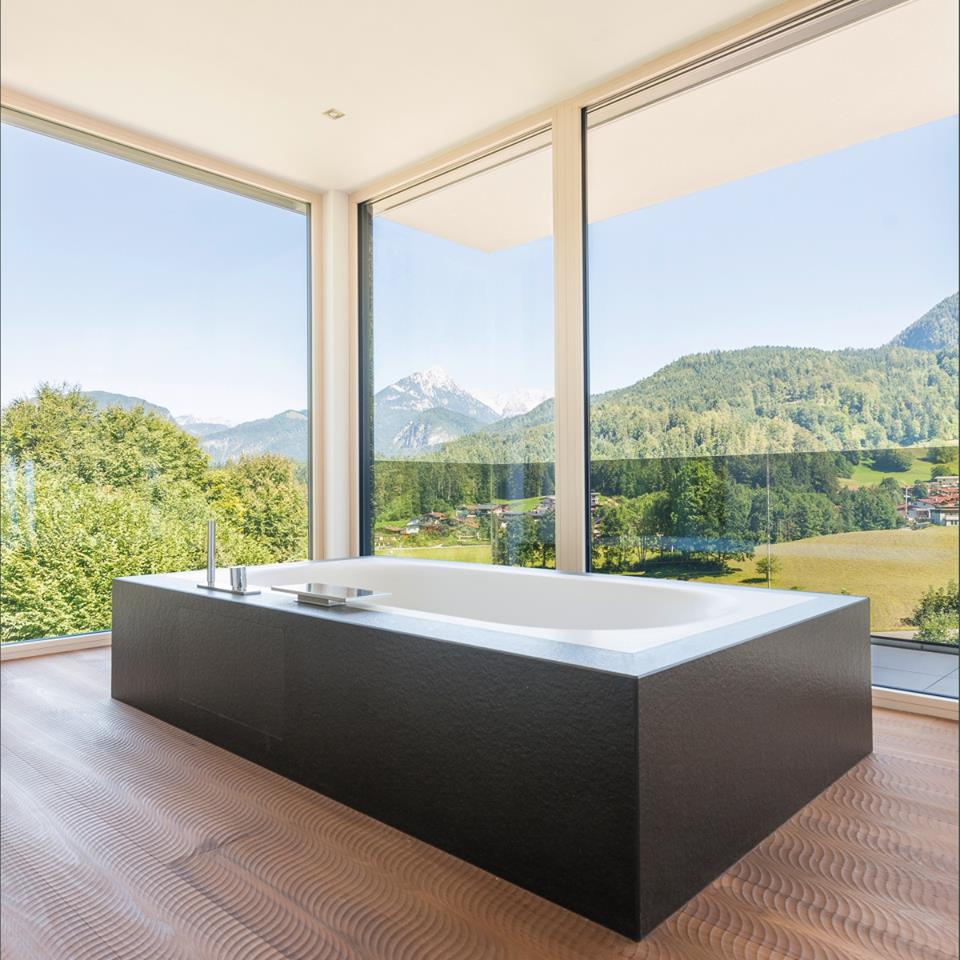 This study examines the thermal performance impact of center-of-glass (COG) deflections in double- and triple-pane insulating glass units (IGUs) installed at several locations throughout the US. Deflection was measured during summer and winter temperatures; the results show that outdoor temperature variations can be represented a linear change in COG gap width in double- and triple-pane IGUs within the temperature ranges measured. However, the summer-winter temperature-induced deflection is similar in magnitude to the observed spread in COG deflection of similar units at the same temperature, which suggests that factors other than temperature are of equal importance in determining the in-situ deflection of windows. The effect of deflection on thermal performance depends on the IGU’s designed gap. Units constructed with smaller-than-optimal gaps often exhibit significant U-factor change due to temperature-induced reduction in gap width. This effect is particularly problematic in high-performance triple glazing where small gap dimension changes can have a large impact on performance.

COG deflection, i.e., the difference in gas space width at the COG compared to the edge-of-glass (EOG), as illustrated in Figure 1, can result from several factors; initial manufacturing conditions that establish a bias toward either concave or convex deflection depending on the relative elevation or atmospheric pressure at the manufacturing facility compared to at that installation location; gas fill temperature offset experienced during fabrication compared to average gas temperature during typical use; dissimilar diffusion rates of gases into or out of gas-filled IGUs over time; and transient natural environmental conditions including temperature, pressure, and wind load, which might induce temporary, reversible deflection. 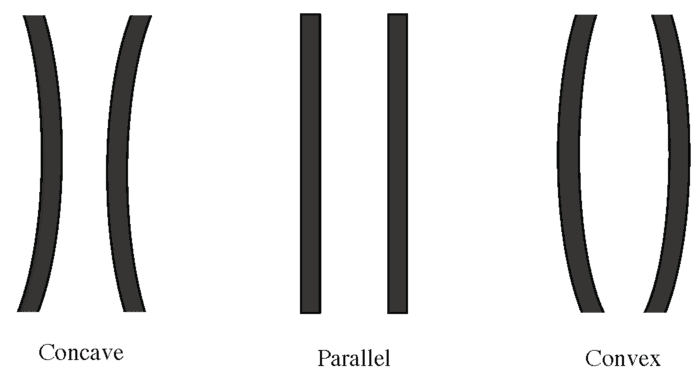 An industry standard addresses the initial COG deflection of a unit while it is still in the manufacturing facility where it was produced [3], but there are currently no requirements or guidelines on acceptable deflection of installed IGUs. Insulating performance of windows in the U.S. is simulated and validated using the procedures outlined in National Fenestration Council (NFRC) technical documents 100 and 102, respectively. For highly insulating windows, in this paper defined as windows with thermal performance better than U=1.7 watts per square meter per kelvin (W/m2K), an acceptable validation test per NFRC 100 can vary by up to 0.17 W/m2K from the simulations. On the most insulating products currently certified (0.51 W/m2K), this translates to a 33 percent allowable variation. Therefore, validation testing of highly insulating windows might not recognize potential cold temperature thermal degradation.

Along with reduced insulating performance, COG deflection can concentrate solar energy reflected off the glass surface. These solar reflections have reportedly caused permanent distortion on vinyl siding and damage to other objects in the reflection path. Understanding the extent of deflection in installed units under normal conditions is essential for understanding reflected radiation as well. 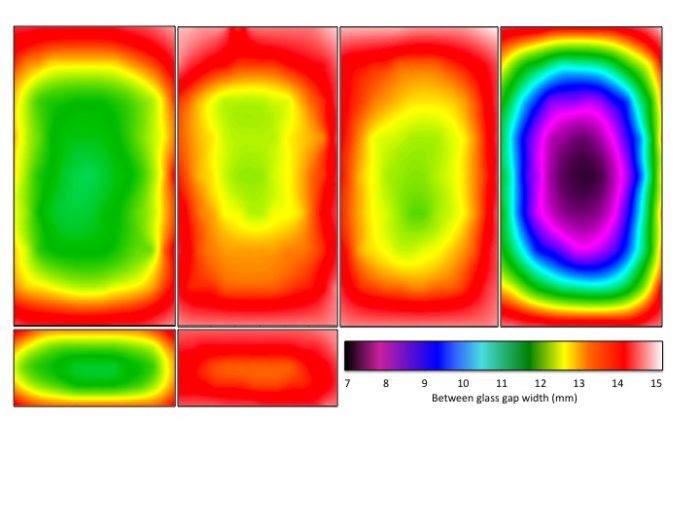 The COG gaps of selected units from Site A were mapped as previously noted. Figure 3 shows the deflection shapes of these six fixed- and movable-sash IGUs, four of which measured 1220 mm x 815 mm and two of which measured 455 mm x 815 mm. Maximum deflection occurs at or near the center of all units, and, in general, the deflection shapes follow a similar pattern regardless of the degree deflected, frame configuration, or unit size. Based on these results, we took the COG spot measurements at the center of the interior glazing surface for all remaining units. This is assumed to be the point of maximum deflection.

In all the mapped units, there is a trend of greater deflection at the EOG along the greatest unit dimension. The bias of greater deflection on the left side seen in most units was introduced by our measurement method and the laser alignment of our equipment. Based on the deflection shapes, we made the remaining EOG spot measurements with the plane of the laser parallel to the frame. The recorded measurement was an average of measurements taken at 2 to 4 locations around the perimeter of the unit, to account for variations along the perimeter. 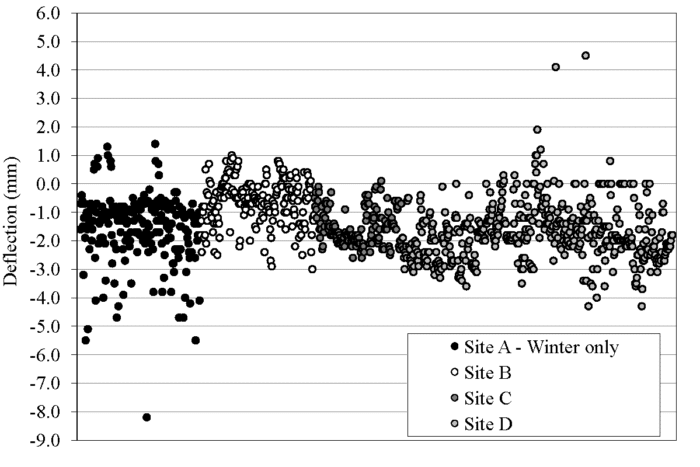 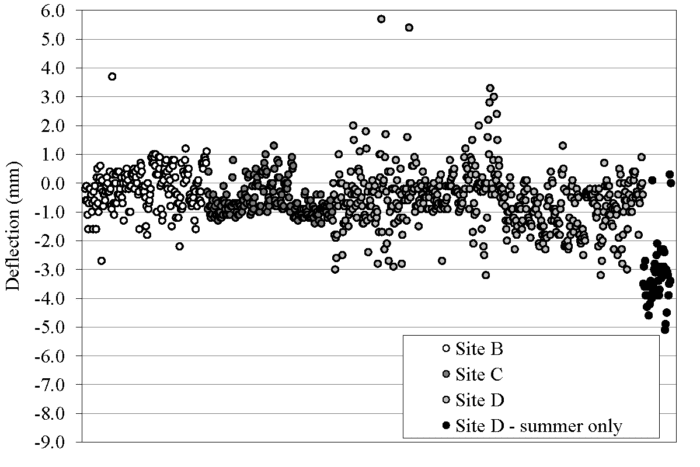 Figures 4a and 4b show COG deflection for the 1807 total measurements made in this study. The data shown represent all measured windows and include instances of failed IGUs and units in direct sun. Units from Site A were measured in winter only, and one house from Site D was measured in summer only, as indicated in the figures. The difference between the mean winter deflection and mean summer deflections was 0.80 mm. The mean deflection for the measurements is different from the mean absolute value deflection since there are both positive and negative deflections. This explains the small mean deflection with a large standard deviation in the summer measurements. The average indoor temperature rose by 4.8°C from winter to summer; the average outdoor temperature difference was much greater, 21°C from winter to summer. 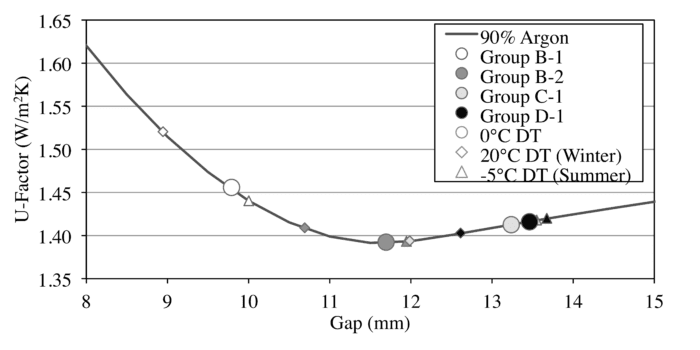 At low Nusselt numbers (Nu) and small deflections a representative average gap width may be reasonably assumed, although large deflections or temperature differences between glass plates will influence convective flow and may make this assumption invalid. The U-factors presented in the following analysis are calculated using Lawrence Berkeley National Laboratory’s WINDOW 6 software program, and are based on the average of the COG and EOG mean gap widths, as presented by Bernier [6]. To represent a typical configuration, 3 mm clear glass was used in all models with a spectrally selective low-e coating of emissivity 0.04 on surface 3 of double pane units and surface’s 2 and 5 of triple pane units. Gas fill was modeled per the design for each group, as provided in Table 1. All insulated glass units were assumed to be 1000 mm x 1000 mm with a vertical orientation. Even though the environmental temperature differences and wind speed associated with the data are not the ASHRAE type winter test conditions, U-factor modeling was performed at NFRC standard winter environmental conditions, for consistency with U.S. standards [8]. It is worth noting that this is a “generous” estimate of the actual winter test condition performance because all of the measured windows would have even smaller gaps at the ASHRAE-specified winter temperature of -18°C, and the U-factor would increase. The U-factor SE is calculated based on the difference in U-factor from the mean at the gap width of a given DT +/- the gap width SE. This procedure gives approximate values for the mean and standard error. We use it in preference to the standard procedure in that it more appropriately displays the asymmetry in the standard error that arises from  the non-linear relationship between U-factor and gap width.

The gap between glass panes is dominated by conduction at gap widths below 4-5 mm, after which the onset of convection occurs. At gap width greater than 4-5 mm the heat transfer rate decreases steadily then levels off at approximately 11 mm for Argon (13 mm for Air and 9 mm for Krypton) at which point boundary layer dominated convection starts. Boundary layer convection creates an isothermal core in the middle of the cavity, making further increases in gap width essentially inconsequential to overall heat transfer. 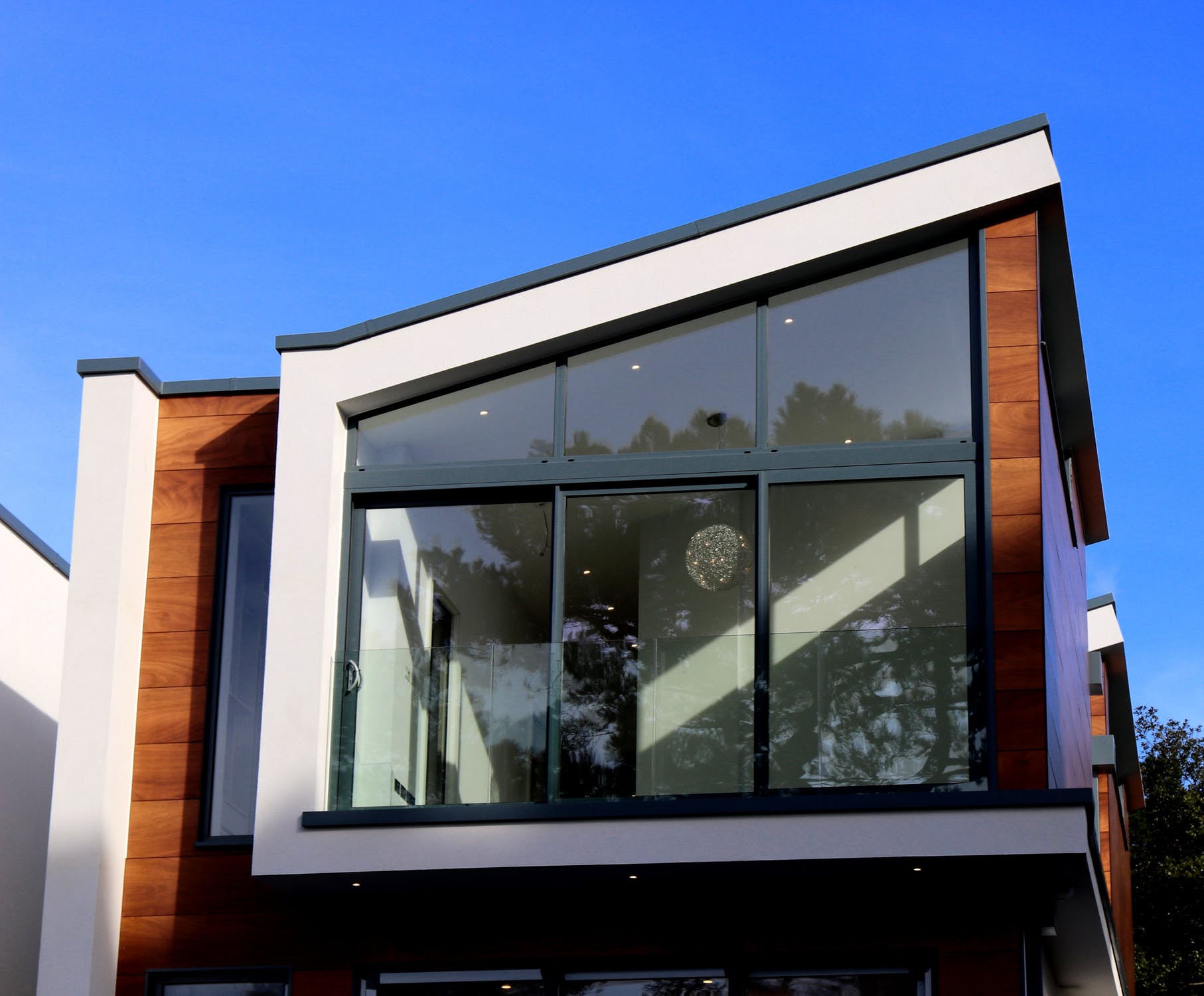 Outdoor temperature variations can be represented by a linear change in the COG gap width of double and triple-pane IGUs for the summer to winter temperature ranges measured. The degree of deflection observed varied with the location, configuration, and test conditions for the units studied and could also be attributed to several other unmeasured and unknown effects.

The temperature-induced deflection observed from winter to summer is of similar magnitude to the observed spread of deflection among similar units all exposed to the same temperature in winter and in summer. This was true for windows from several different manufacturers and installation locations, which suggests that there are other factors of equal importance to temperature that determine in-situ deflection of windows.

The impact of deflection on thermal performance is based on the designed gap of the IGU. Units designed with smaller-than-optimal gaps may have significant U-factor changes associated with inherent gap variability compounded with temperature-induced gap reduction. This is particularly problematic for high-performance triple glazing where small gap dimension changes can have a large impact on performance. It is possible to design an IGU with a gap wide enough to mitigate any deflection effects on performance. Simulation of the thermal impact from COG deflection is included in the WINDOW 7 software from LBNL.

Field measurements clearly show a correlation between gap width deflection and temperature, but it is difficult to draw any definitive conclusions from our data regarding the correlation because this study was performed in uncontrolled indoor and outdoor conditions. In addition, it is not possible to isolate correlations with specific window physical properties because of the limited variation in properties among the test units. The next step should be to perform COG measurements under controlled laboratory conditions to quantify deflection shapes and sizes. Mathematical model verification should be performed in parallel with laboratory testing. Deflection calculations based on research from Texas Tech University [5] and U-factor calculations based on computational fluid dynamics/finite element analysis should be compared to the calculation methods used in this study as well as laboratory and field test results.